In September 1847 the county Carlow based priest, Fr James Maher, appealed for help across all classes and religions

as another year of Famine gripped Ireland. Maher was a staunch critic of evictions and openly criticised landlords who engaged in such practice. It was hardly surprising given the level of eviction in the Carlow area during the 1840s; the county amongst the worst in Leinster in 1849. In his address to the people of Ireland in 1847 Maher claimed that the devastating effects of eviction were now an all too  common occurrence and that in some parts of the country men were simply ‘left to expire in the ditches’.

Fr Maher left behind a memoir of his experiences of the Famine and those of county Carlow. Maher it seems was relentless in writing to Dublin Castle and other members of the British government determined to provide relief for those most in need. In his memoirs Maher provides horrifying descriptions of the dead, in this case in county Mayo.

According to Maher, in one letter to the Lord Lieutenant at Dublin Castle, a poor woman found dead on the roadside,  near Westport was left for days unburied on the highway, with a stone at her head and another at her feet. Likewise, Rose Hoban, of Knocksaxon, in the parish of Straide was eight days dead before she was interred. Another man who was refused entry to the workhouse scrambled about three miles from Swinford after he had been evicted and where he dropped dead on the road.

Maher as already alluded to was particularly vocal about the actions of the crowbar brigade and the destructive nature of eviction. About one eviction in county Galway he quoted The Times:

” The tenantry are turned out of the cottages by scores at a time. As many as 205 men, women, and  children have been driven out upon the road and ditches  by way of one day s work, and have no resource but to  beg their bread in desolate places, or to bury their griefs,  in many instances, for ever within {he walls of the union  workhouse. Land agents direct the operation. The  work is done by a large force of police and soldiery.  Under the protection of the latter the crowbar brigade  advances to the devoted township, takes possession of  the houses, and with a few turns of the crowbar, and a  few pulls of the ropes, brings down the roof, and leaves  nothing but a tottering chimney, if even that. The sun  that rose on a village sets on a desert. The police return  to their barracks, and the people are nowhere to be found,  or are vainly watching from some covert for the chance  of crouching once more under their ruined homes. In  some places the population has disappeared, leaving  only mounds to denote the site of their cottages. 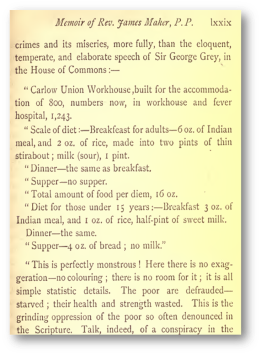