Evictions and clearances were widespread in county Kerry during the Famine, none more so than on the properties owned by Trinity College Dublin. One of the biggest landowners in the country, eviction soared on the college estates as middlemen were pushed out during the 1840s. In 1849 the Cork Examiner sent a reporter to Kerry to investigate Trinity College following the eviction of 127 families,  or approximately 635 individuals in north Kerry, where college property was leased to landlords named Stoughton, Pope and Rice. These evictions and much more are covered in-depth in the groundbreaking new study by Bryan MacMahon, The Great Famine in Tralee and north Kerry published last month by Mercier Press. 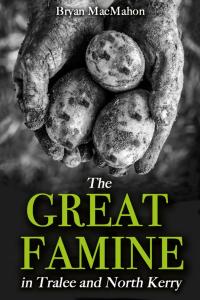 Among the evictions which MacMahon has unearthed included those at: Ballinascrena (35 families), Ballinvranig (16 families) Knockavuhig (15 families), Acres (11 families), Corabally (13 families), Cloarbougher (9 families), Derryreagh (15 families), Beendhuve (7 families) Crotto (2 families), Maulin (2 families). The reporter concentrated on Knockavuhig where he saw the unroofed cottages recently vacated, and then saw smoke coming from some huts on the roadside. These were about five feet long and three feet high and were made of old timbers and sods of grass. In these huts there were three evicted families, two named Leahy and one named Halloran. John Leahy had held four acres of land from Pope who held the land under Stoughton who held it under Trinity College, according to the middleman system. Leahy paid £4 a year in rent and was one year behind when he was evicted by order of the solicitor of Trinity College. He was receiving one and three-quarters of a stone of meal every week to feed his family of five. The reporter crouched down to enter the hovel through the opening which was three feet high and operated as both door and chimney:

‘On the damp earth was shaken a little straw, on which lay some eight or nine sickly- looking children, their faces as black as those of Negroes from the turf smoke. I have often seen pigs better littered.’